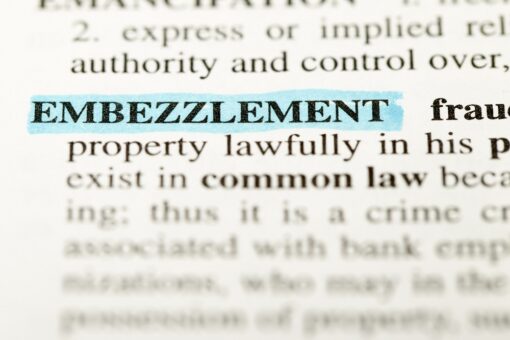 Being accused of or charged with embezzlement is a very serious charge. Depending on a person’s profession, their reputation could be permanently affected just by being accused. This is why it is important to let a criminal defense attorney start helping you the moment you know you are being suspected of this crime. Contact Simmons Wagner, LLP at (949) 439-5857 now for a free legal consultation.

Most People Are Surprised by the Reality of Embezzlement Cases

When the average person thinks of an embezzlement case, they are likely to imagine a high-profile crime involving a bank and huge sums of money or another white-collar crime scenario. The truth is that most embezzlement cases are much smaller. Remember that any person who takes cash or any item of value from their employer (or another party who has entrusted their money to them) can be charged with embezzlement.

Potential Professional Consequences for an Embezzlement Charge and Conviction

Just the accusation can be enough for people to doubt your trustworthiness. A conviction can make your entire clientele drop you and could prevent you from holding a state-issued license in the future. Even if you do not work in a financial capacity, having an embezzlement conviction can make it hard to find an employer who is willing to take a chance on you.

Potential Defense Options for a Charge of Embezzlement

While it all depends on the specifics of the case, there are a few defense options that are more often used than others in embezzlement cases. We could work to show that you believed you were permitted to use the money or property that you are accused of embezzling and that you had no criminal intent. We could also work to show that you were not involved at all and have been wrongly accused.

Does it Pay to Repay the Money?

People accused of embezzlement often wonder if it would make sense for them to repay the money. If they do so voluntarily, and before they are charged, could it keep charges from being filed? No. It is still a crime to have embezzled, even if you pay it back.

That said, if you are able to return the money, this could be used as a mitigating factor by your criminal defense attorney. This means we can use it to argue for a lesser charge or, if you are convicted or accept a plea deal, a lesser sentence.

Your next move is to contact Simmons Wagner, LLP at (949) 439-5857 so that we can get started with a free legal consultation. We look forward to finding the best way to help you through this difficult time.